Last Tuesday marked the kick-off of the Digital Whitman course at UMW. This course is part of a larger NEH grant that is focused on an inter-campus approach to pedagogy that is designed around a rich and distributed infrastructure of social media. The project is titled Looking for Whitman, and it brings together five geographically distinct courses on Walt Whitman in an attempt to experiment with how series of distributed faculty and students can share, collaborate, and converse out in the open.

The premise of the course is Professor Matt Gold’s brainchild (you can read his overview of the course here), and when he asked me to be a part of the project early on I jumped at the prospect because I firmly believe it’s an important opportunity to illustrate how social media can re-imagine the possibilities for sharing amongst and between students of a similar topic from a wide range of institutions. It in many ways frames the importance of an open and porous ecosystem of sharing not just within a single institution, but across many. It builds upon and amplifies an experiment like UMW Blogs by bringing a number of different institutions into a larger, focused conversation around a particular theme or topic.

And while the courses all still run a face-to-face model at their respective universities, a large majority of the work will be happening online and between faculty and students from entirely different campuses. All of which presents a really fascinating opportunity for re-thinking distributed courses between universities, and opens up an exciting possibility for re-imaging the architecture of distributed learning. Something that just about any LMS on the planet couldn’t even begin to address, or even imagine, given how deeply rooted they are within the logic of a single institution, not to mention how entangled they are in the restrictive logic of stringent permissions and content ownership—yet another roadblock to truly essential innovation brought to you by the LMS!

So, as may be clear by now, I’m pretty fired up about the possibilities of this project because it marries the classroom experience to a more distributed network of learners from a variety of institutions that represent a wide-range of students from all walks-of-life and backgrounds. From the University of Mary Washington to Rutgers-Camden to CUNY’s City Tech to Serbia’s University of Novi Sad, the project represents a rather compelling spectrum of courses from a variety of universities that provide a unique network of students from a wide array of experiences. This is not a “country club for the wealthy,” but a re-imagining of a distributed, public education that is premised on an approach/architecture that is affordable and scales with the individual. It’s a grand, aggregated experiment that will hopefully demonstrate the possibilities of the new web for re-imagining the boundaries of our institutions, while at the same time empowering students and faculty through a focused and personalized learning network of peers, both local and afar.

Now, all that said, what makes it all the more exciting is that we’re building this ship as it sails. We have set up an overarching site premised to some degree on the work we have been doing at UMW with blogging and aggregation, a setup cheap enough that we can direct more of the grant money to hiring people and training faculty and students than worrying about designing and programming yet another framework. The tools are already out there, what we are doing is focusing on hacking an open source application like WPMu and BuddyPress to give us as much flexibility as possible. And, that’s right, we’re pushing the logic of the syndication bus that much further, trying to see just how publication and syndication can create a rather simple, yet powerful framework for sharing, collaborating and conversing. So, to that end, I’m going to talk quickly about two three syndication based experiments we’re working on right now with this project. 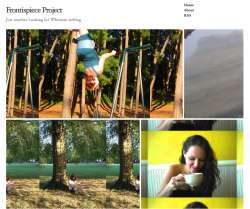 The frontispiece project is just under way, and it foregrounds the power of tag-filtered syndication for a distributed series of courses. At UMW Professors Mara Scanlon and Brady Earnhart—a project the other four courses will also be doing—are having the student design their own frontispiece as a means of reflecting upon the 1855 frontispiece from Whitman’s first edition of Leaves of Grass.

They’ve posted the frontispiece in their individual blog (which feeds into a course, aggregated blog you can see here) and tagged it with frontispiece. All the posts from around the Looking for Whitman site are republished in the http://tags.lookingforwhitman.org über blog (created thanks to the Sitewide Tags Pages plugin) which means we can get a single feed of all the posts from around the environent tagged with frontispiece: http://tags.lookingforwhitman.org/tag/frontispiece/feed.

Now, I created a new blog for the frontispiece project at http://frontispiece.lookingforwhitman.org and activated a cool photo theme called AutoFocus. After that I simply dropped the sitewide feed for the frontispiece tag into FeedWordpress, and every post tagged frontispiece will now republish into this project blog creating a very cool visualization of all the students’ frontispieces from all five courses. Tale a look here. It was dead simple, and the effect is not to be underestimated, this is now a space we will see almost 100 frontispieces emerge reflecting the wide-range of students and faculty traveling through this course together. 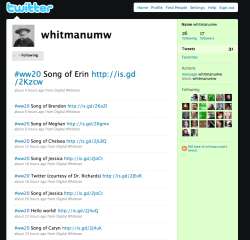 There have been some rumblings since Twitter took off that it has the potential to replace RSS readers, I haven’t found this to be entirely true in my experience, but there can be no doubt I spend far more time in Twitter than my RSS Reader on a daily basis. And I am pushing hard that this course experiment with Twitter (although I am getting some push back from some analog UMW professors who will feel the wrath of the Reverend, and soon) and one of the things I discovered is that it would be rather easy to have a Twitter account that basically republishes all the students distributed posts at UMW into a single twitter feed. Given we are already aggregating all the UMW-based posts into a single blog, I simply activated Tweetable (my new twitter app for WordPress Mu thanks to Shawn Miller) which allows me to include the project hashtag (#ww20) as well as tweet right from the WordPress site.

So, in short, whenever a post is re-published on the course blog, a tweet is sent out through the @whitmanumw twitter account, so you can follow this account as a kind of course RSS reader, or simply search the hashtag #ww20 to see the latest posts as well as what people are saying about it on twitter, if anyone at UMW actually tweets, which the dearth of is highly annoying to me. I mean the course is titled Digital Whitman, not Analog Whitman, get with the program hippies! 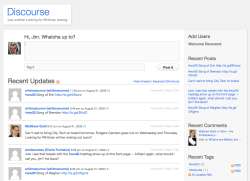 This idea is one I have been playing with for a while, and I have never really seen it pan out, but I figure what the hell, I’m already losing the Twitter battle, might as well unload everything at the very beginning, and cry myself to sleep thereafter. I created a separate blog at http://discourse.lookingforwhitman.org that I themed with P2, which is basically a Twitter knock-off theme for WordPress. And while students can become authors on this site and use it as a quick and easy space for discussion (something better handled on Twitter in my opinion, you hear that Mara, are ya listening?), I actually think of it as a way to integrate the Twitter conversation into the ecosystem of the Looking fro Whitman site via the feed for the #ww20 hashtag on twitter. Finding the feed for a hashtag is made easy by http://search.twitter.com—you can see the feed for the hashtag #ww20 on the wrongfully reviled Twitter here.

Once I got the feed for the hashtag, I simply activated FeedWordPress on the Discourse blog, and dropped it in there, and automagically all the tweets with #ww20 republish within this blog, and become part of the Looking for Whitman ecosystem. They are now searchable and discoverable through recent posts, sitewide search, and simple RSS feeds dropped in the sidebars of course and/or individual blogs.

So, it is just the first week, but as you can tell, the experimentation will be fast and furious, we have plans for digress.it (or what was CommentPress) as well as Google MyMaps, YouTube, FLickr, and all those other not-so-new-fangled sites. So, stay-tuned to the bava for evermore cutting edge instructional technology, your one-stop-shop for brilliance writ large