I have been mentioning DSader a lot lately on this blog, and that’s mainly because I have been deep into WordPress Multi-User mode for a couple of weeks now. And between the upgrade to 2.6 and the general overhaul of plugins, themes, etc., I find I’ve devoted no insignificant amount of time to plugin hunting –a truly enjoyable activity. For many of my most valuable WPMu plugins, I continually find I am utilizing DSader’s work. He wrote the following plugins that I can name off the top of my head: Userthemes (a must), Sitewide “Three-in-One” Multi Widget panel, Toggle Admin Menus Sitewide, and the indispensable More Privacy Options, to name a few.

So, there is no question DSader has been a veritable mensch when it comes to sharing with the WPMu community, and I’d like to say thanks. But before I even can he comes out with an updated version of his Sitewide Comment Tracking plugin for WPMu that reminds me just how deeply indebted I am to his work. If you haven’t tested it, I highly recommend it. It tracks the comments you have left on numerous blogs within the WPMu community. So, for example, If I leave comments on various blogs, I can track them from the Comments–>My Comments tab. It provides an awesome interface to quickly scan where you’ve commented and who has responded, an amazingly powerful feature for a controlled, yet deeply distributed architecture like WPMu. 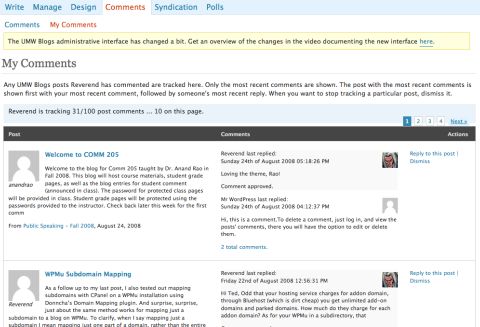 Think about it, this is an amazing way to let faculty and students know how they can track response to their comments easily, something which isn’t all that easy in the regular blogosphere. So an engineered improvement to make the community potentially more manageable.  And so many of DSader’s plugins are just like that, it’s as if he were programming for UMW, he comes from an educational setting and it’s amazing how many of our needs and desires are met and satisfied by his work

Update: While writing this I received an email from him telling me the Sitewide 3-in-1 Widget panel has been updated, with a bug or two fixed, Is DSader sick or what? What can I say, it’s people like him that make this whole thing so much funner and cooler. Thank you, thank you, thank you!!!