The Design of Openness

Cole Camplese recently had a provocative post about open design that has me thinking about a few things that might frame some of the ideas that I think are key to imagining a loosely joined, open, and mashable community for teaching and learning.

I am thinking more about how openness should be built into the design process. Not really instructional design per say, but design in general … in my mind learning design is looking at the notion of building learning opportunities in a more broad sense than more strict instructional systems design.

I think this idea of building openness into the design is at the heart of re-imagining how we think about the ways in which we learn. It’s a great idea, re-kindles for me the importance of imagining an aesthetic for the distributed model, allowing people to conceptual the space visually (which moves back towards thinking about an open instructional systems design). In fact, Ernst Jünger’s novel The Glass Bees has been useful in this regard:

At first glance, the glass hives were distinguished from the old pattern by a large number of entrances. They resembled less a hive than an automatic telephone exchange…what if what I have been observing was not so much a new medium as a new dimension, opened up by an inventive brain; it was a key which unlocked many rooms. For instance, what if these creatures could be used—as they are used in the world of flowers—as messengers of love between human beings….? (129, 140)

This description of the hives as a loosely joined dimension of exchange that is decentralized and automatic, yet potentially capable of connecting humans though messengers of love is a fascinating image that frames the imaginative space of Jünger’s novel as remarkably prescient in its subtle elegance. He frames a kind of proto-naturalistic system of exchange premised on nature, and the model, as Bruce Sterling suggests in the introduction to this novel, such a sentence describing the glass bees as less a beehive than an automated telephone exchange “uncannily anticipates the scattered structure of the internet” (ix)

And this image of the beehive (or nest given the natural state I am thinking of) is sticking with me because I think it offers a powerful way to think about how we might design these spaces that are premised more upon openness with no one center, but rather a distorted, naturalistic sphere with innumerable entrances and exits. This is the metaphor I have been looking for to explain why I think an application like WPMu might be understood as an example of open design, and Drupal not so much.

), but it’s something I have been trying to explain for a while now, and I can finally articulate what I was trying to say at Northern Voice this past February durng the application banter. Unlike Drupal, WPMu is like a huge beehive with no center, it’s scattered and unruly like the internet. And that is one of its greatest strengths. Think about it, anyone with a blog on the system has their own unique sub-domain they can enter through, not unlike a cell in a beehive.

This model of a system that is both porously open and de-centered suggest a different, almost naturalistic, element of design. Loosely joining a series of cells into a honeycomb, not with wax but with rss glue. So someone using a WPMu blog has the ability to be part of a community, yet at the same time have their own unique space that they control entirely. It strikes me as very different from the nodal logic of most CMSs, which are very much pointed to a center, and driven by the logic of representing information in structured boxes. This design is more about efficiency than effect and in many ways it is not a natural organization of information, rather it is rigid, with angled corners that smack of a man-made apiary. 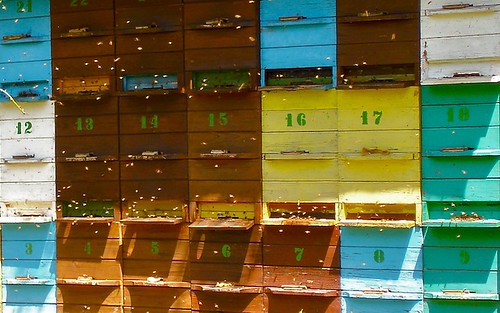 I know this may seem needlessly polemical and hard on an open source CMS like Drupal, but I think there’s a larger point here. In fact, I am trying to think about why a much more de-centered design that is scattered and affords the individual user far more control over their own cell may be more akin to the internet than a centralized node of control/entry that characterizes most CMSs—they can’t help it, it ’s in their DNA.

De-centered, distributed publishing is a flow of information we are not used to, it’s anarchic, somewhat confusing, and difficult to follow unless you are in the “natural” flow of things. Yet, that is the key here, once in the stream (and the idea of a stream here is a much larger aesthetic and design shift that the internet as undergoing more broadly for a number of years now) the trace of the arguments, discussion, and ideas become that much more naturalized to the flow of information in a community while at the same time keeping the power of design (think themes and widgets here) as well as the overall control of the space in the hands of the individual.

1 Response to The Design of Openness