Faculty Academy Videos, or the beauty of our New Media Specialist 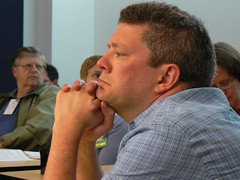 Faculty Academy posts will be streaming in irregularly as I grok this year’s amazing event. So much to say, but for the time being I’ll be relatively brief. This year’s conference was about many things, pushing the boundaries, going boldly, and refusing fear as an alternative. One thing from this year’s Faculty Academy that I think embodies all of these themes beautifully was Andy Rush’s video work this year. He took the webcasting and video presentation/archiving of this event to the next level (and a special shout out to David Dean who was the audio Godhead throughout the two days). 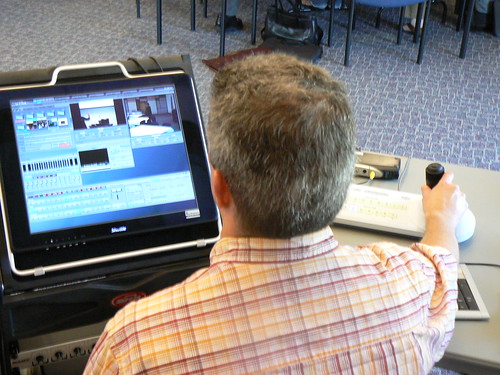 We all bust his chops about his new position as a New Media Specialist and joke him about the nature of his work, but that’s only because we don’t understand just how far he is pushing the web envelope to make video an integral, sharp, and professional part of the academic environment at UMW. There is no better New Media Specialist, and the very fact that we now have that unique position occupied by Andy Rush is a measure of the genius behind the imagined future of DTLT.

This genius is no surprise to all of you who caught the event via UStream, for you got a taste of Andy’s beautifully produced streaming videos of the plenary sessions and Keynote firsthand. It was awesome, and he even built it into a self-reflexive moment within his unbelievable talk about New Media during the “UMW Blogs Begins” plenary (I will blog this when that video is published, it is a gem!).

Not only was the Ustreaming top notch, but Andy has archived all the videos and is now republishing them over at the Faculty Academy blog here. (Keep in mind he is using the high-powered h.264 codec he explains here for extremely high resolution–another element of how new media was the star this year —Andy notes in the comments below that he is not using this codec for the Faculty Academy videos, but you should still read his post about h.264).

So far he has published the following videos: 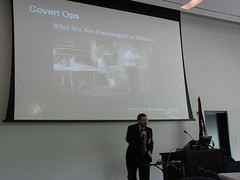 The Deck Wars competition, which was an event that Jerry Slezak did a phenomenal job re-imagining and organizing. This fun-filled event was inspired by a similar event at SXSW called Battledecks that we found out about thanks to Tom Woodward’s web surfing savvy. Our’s was harder than SXSW’s though because our four bold contestants (Jeff McClurken, Jennifer Pollock-Wahl, David Rettinger, and Barabra Sawhill) presented on a deck of slides they had never seen before (not like the SXSW prima donnas who got a full two minutes

). The amazing slides Cathy Derecki created for the four players made this process far harder than you might think. Jeff came away with the title of “First Annual Deck Wars Champion,” for this will surely be the first of many Deck Wars. 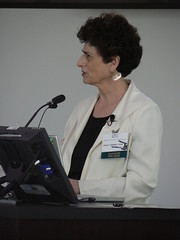 Dr. Janet Murray’s Keynote address: “Inventing the Medium: Learning and Symbolic Expression from Knucklebones and Senet to Second Life and Spore.”
This talk was amazing, and while Dr Murray may seem to start off a bit slow (this excludes a classic Gardner Campbell introduction), this talk may have opened up the most conceptual possibilities for thinking about gaming, humanity, and the shared future of symbolic spaces. Murray talks to the arts, social sciences, and hard sciences at once, offering an amazing framework for conceptualizing games and the development of human communication. It is a truly thoughtful and provoking talk, and I will definitely be re-watching this soon before I blog it, for it is definitely one of major importance that I haven’t fully wrapped my head around.